In 1966, National Periodical Publications teamed with the Ledger Syndicate to revive the BATMAN newspaper comic strip to take advantage of that year's B 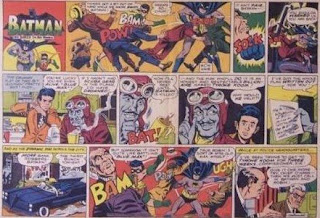 atmania. Heavily promoted but ultimately disappointing, this incarnation was most definitely the camp TV version of the Caped Crusaders, right down to Chief O'Hara who had never really appeared in the comic books. Although most papers dropped it much sooner, the strip actually limped on until 1974 during which time it took some fascinating turns! Not the least of these was giving up Batman and Robin a year or so before the end but retaining Bruce Wayne and Dick Grayson in support of a new hero called GALEXO! As this strip has never been reprinted save for a brief continuity in THE AMAZING WORLD OF DC (featuring Green Arrow), its very scarcity has made it intriguing to fans.
Very few examples can be found even on the 'Net and those that are tend to be poorly scanned (as seen in most of the exa 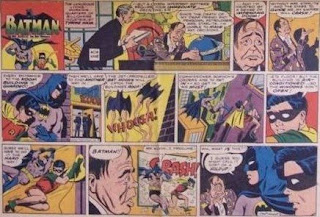 mples here). Although signed by "Bob Kane" long after his famously overcompensating agreement with DC on the comic books had ended, art was by familiar hands including Sheldon Moldoff, Nick Cardy, Joe Giella and later Al Plastino. The final credited artist on the strip was Fran Matera, a longtime newspaper strip artist whose strips included NERO WOLFE, INDIANA JONES and THE LEGEND OF BRUCE LEE. Matera would thus have been the artist on the Galexo-era strips.
Has anyone seen Galexo? Does

anyone have a picture or even a memory of this character? Was he an alien? A traditional superhero? What the hell did he have to do with Batman and Robin and why did they stop being Batman and Robin? Was the strip still called BATMAN? How many newspapers even carried it towards the end? Okay, troops. You have your assignment! Find me a strip with Galexo and we'll run it here!