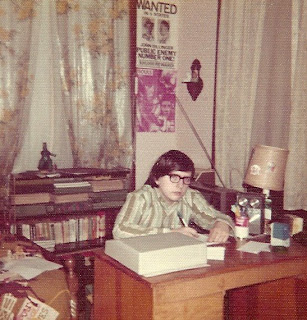 Franklin Delano Roosevelt died on April 12th, 1945. As America's only 4 term president his funeral was, as expected, huge! Someone in Detroit decided to save a copy of their local paper on Tuesday, the 17th of April to commemorate the President's passing. Somehow, said newspaper, in all of its rotting pulp paper glory, ended up in a used bookstore in Cincinnati where I found it 30 years later in 1975. The historical stuff was all well and good but 16 year old me (seen above in an early incarnation of the Library) just couldn't resist clipping out a bunch of the comics! Thus, for no reason other than the fact that I was ignorant enough to def 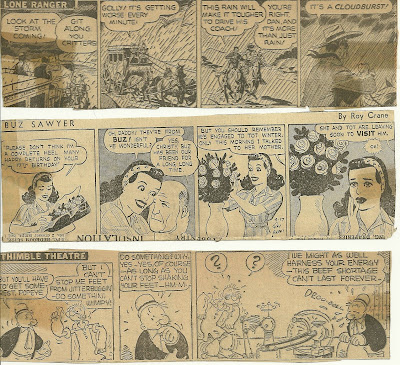 ace this historical, collectible newspaper (which I still have but which crumbles more every time I touch it these days), we present a selection of the funnies from April 17th, 1945. BATMAN, THE LONE RANGER, JOHNNY HAZARD, DONALD DUCK, BUZ SAWYER, BARNEY GOOGLE (which was pretty much SNUFFY SMITH by that point in all but name), TILLIE THE TOILER, BLONDIE, BRINGING UP FATHER and THIMBLE THEATER (with Popeye!). BLONDIE and SNUFFY still survive. Does POPEYE?
For the record, apparently the popularity of Maggie and Jiggs and Dagwood and Blondie merited larger publication as the original printings were notably a size or two up from the rest of the strips seen here. 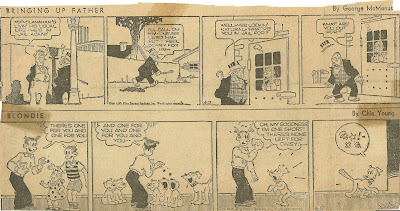 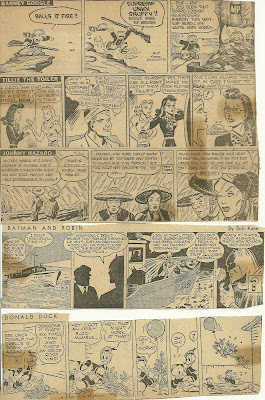 Posted by Booksteve at 5:13 PM