Okay, so me and my friend Terry, see, we'd been seeing all these TV ads for the new Christopher Lee Dracula movie back in '72, okay? All of the ads say that the a 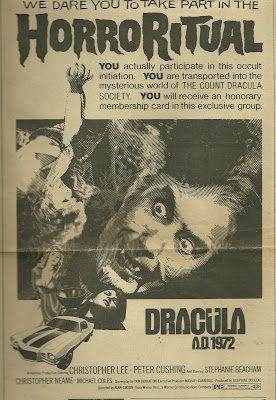 udience will ACTUALLY PARTICIPATE in something called a "Horroritual!" COOL! We were all about the scary stuff at age thirteen, y'know? Hammer films, SCREAM IN on TV with the Cool Ghoul as host, FM, CASTLE OF FRANKENSTEIN. Alla that! And THIS particular Drac film was gonna update the series to our own modern world!! DRACULA A. D. 1972!! What a groovy idea! It just. Made. SENSE!

So anyway, we get to the theater, the RKO ALBEE in downtown Cincy. It was either opening day for the film or day two. Not sure. Now, the Albee had seen better days. Once the prestigious showplace of Cincinnati's Fountain Square, it had been just slightly up from a grindhouse for the last several years showing a mix of first run B movies, second run A pictures and blacksploitation flicks. It was kinda grungy looking by that point but with a nearly overwhelming air of lost grandeur.

VIDEO WATCHDOG's Tim Lucas informs me that his future wife Donna was most likely the person working the outside ticket booth that day. I wouldn't meet Donna officially for another two decades so we'll never know for sure. Inside the vast lobby behind the ticket booth, however, there was a coffin with a sign promoting the Horroritual! Next to it was a table with a mock newspaper promoting the picture and the Horroritual! We each eagerly grabbed one of THOSE babies as a collectors item! We were psyched, buddy! We had arrived way early and the auditorium was empty so we simply sat and rapped and read some of the stacks of comics we had both just bought on the next block at King's News. 20 cents! Jeez! Couldn't get nearly as many as we did just a couple years back for 12 or 15 cents! Maaaan!

Neither of us had a watch and eventually we had our bags and sweaters and all of our "stuff" just sprawled out across several of the hard, uncomfortable Albee chairs. No one else came in...ever. Well, that's not true--there were a couple old guys toward the back who seemed to have fallen asleep or somethin'. ANYhow, we knew time was getting close. We didn't know what the Horroritual would be but we were READY!

Then the lights dimmed....NO! As often happened in those days, then the picture started! It would be a few more minutes before the lights dimmed! The picture started...CRESCENDO! Awww, maaan! The second feature was on first! It was an okay suspenser with my favorite actress, Stefanie Powers and a creepy actor named James Olson ("Jimmy Olsen! Hahahahahhaha! We thought THAT was funny!). Awright, now...90 minutes later. That's out of the way! Bring on the Horroritual!


DRACULA, A. D. 1972! Wow! What an openin! All dark and gothic and creepy lighting with Van Helsing and Dracula tussling on a coach! One of the best scenes EVER in a Dracula picture! But then... Airplanes! Swinging London! Hippies! Just like real life in 1972! Hey, where's Chris Lee? We felt we knew him well enough to call him "Chris." Okay, THERE he is again...finally! What'd he do, just work, like, two days on this thing? Lots of distracting boobage, though. Good, good! Waitin' for the horroritual here. When's it happen?

After awhile, Drac gets killed...again...as expected. The lights come up aaaaaaaaaaand...nothin'! HUH??!! That must have BEEN the Horroritual, we thought...What a rip. What a cheezy way to sell a movie! Awww, maaaaan! 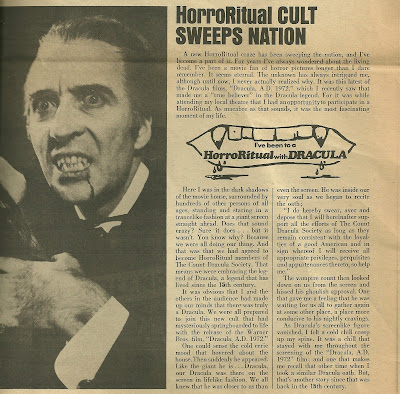 of PD horror clips and trailers and what do I find hidden in this little gem? THE HORRORITUAL!!!! Well, at least the best parts of it.

The actual Horroritual which apparently the Albee projectionist simply decided not to run that day as there were only a handful of conscious people in the audience, is a short film made in conjunction with Dr. Donald A Reed's Count Dracula Society as away to cross-promote the film as well as the society. On-screen we see Barry Atwater (the vampire in that same year's TV-movie THE NIGHT STALKER) camping it up as a more traditional mittel-European-style vamp and he asks you to take the Oath to become...one of THEM!

In fact, as you probably already noticed, above is that very clip from that Zacherly tape--the Horroritual itself! The scans above are from the newspaper/flyer we picked up that day. Actor Atwater died 6 year's later. Donna and Tim Lucas got married and lived happily ever after. I haven't seen Terry since about 1990 now. Zach is in his nineties now and will probably live forever...assuming he was ever really alive at all! DRACULA A.D. 1972 is now rightly considered (except for that still awesome opening scene) one of the WORST and most dated Hammer films of them all and just last week, Chris...Ahem! Christopher Lee became SIR Christopher Lee! How time flies.
Posted by Booksteve at 1:09 PM