Michael Jackson and Me 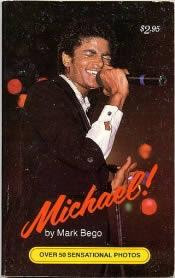 In the early eighties I was working as a Waldenbooks assistant manager in the strangest mall you would have ever seen. Crestview Hills Mall in Northern Kentucky had been planned as early as the late 1960's and was finally built a decade later right at the crossroads of the bypass circle Interstate and the main highway through the state. Despite its seemingly ideal location, reports are that one of the main anchor stores pulled out before the mall opened. There was room for 95 stores and by 1980 about 16 or so had moved in including one generic department store on one end and the Waldenbooks pretty much on its lonesome down at the other. Repeated attempts at luring another anchor store failed because no one wanted to build from scratch and only a big swampy area existed down at the other end of the huge and almost always completely empty parking lot. Over the years many of the stores that HAD moved in closed and toward the end of the mall's existence about five years ago, only a half dozen stores remained open.
Back in the eighties, however, my manager and I determined to make our unique little store successful so we looked for every opportunity to TELL the customer what they wanted. We really had no traffic to speak of...ever...so we had to think outside the box.
While all of this was going on, Michael Jackson had resurrected his floundering career with a couple of medium range solo hits including "Rock With You." Then he released THRILLER and suddenly everyone wanted to cash in on his renewed fame. When teenage girls started giggling and practically wetting their pants over every new issue of TIGER BEAT with the newly gloved one's picture, I got the idea to keep a list. Every time we got something new with Michael on it we would go through and call all of these teen girls (and one guy. Don't ask.) and more often than not, they would come right in, often relying on their parents to drive them over--parents who would often themselves end up buying something! We had a full page of yellow legal pad with names and numbers. At first it was magazines. Then the books started. Seen here is one of the first. Each new book had pretty much the same photos and the same rewritten press agent bios but every single one of these kids ate 'em up like candy and gushed over us providing the service that we did for them! One 12 year old girl, Lauren, came in once to introduce her friend to me. She said, "Steven this is my best friend, Stephanie." I responded with, "Hi, Stephanie. I'm Lauren's bookseller." Little by little, as these things do, the craze blew over. As Michael's startling and at times grotesque metamorphosis continued, the girls fell off the list and the list itself went away. This was around 1985. Cut to about 15 years later. Michael was in the early stages of his biggest scandal and had long since transformed from a handsome young African-American lad to something akin to an alien. One day a woman came into my new store in a real mall and I recognized the unusual last name on her credit card. "Do you have a daughter named Lauren?" I asked casually. "Why, yes. How do you know Lauren?" I rattled off the tale of Michael Jackson and her daughter's obsession. She smiled and laughed in all of the right places and informed me that Lauren was now an attorney. Two days later, Lauren came into the store and I saw her for the first time since she had grown up. She was friendly and polite but whispered that she would really, REALLY appreciate it if I never again mentioned her prepubescent Michael Jackson obsession to anyone! Lauren, if you're reading this, I'm sorry but it was too good a story not to tell one more time in memory of Michael.
Posted by Booksteve at 10:21 PM