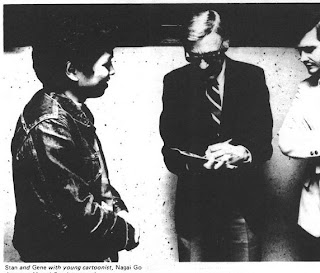 e of my Facebook friends!). Buried within its pages for those still reading it was an interesting interview with a man named Gene Pelc who worked in marketing and licensing in Japan for Marvel's then-parent company, Cadence. Within the article, there were several rather murky reproductions of photos which now, all these years later, seem to take on slightly more significance. The photos are of Marvel's own Stan "the Man" Le

oonists on a seventies visit to the Far East. The first here is Stan meeting the young artist Go Nagai (not "Nagai Go" as printed) whose most popular creation remains CUTIE HONEY. The other shows Stan being introduced to the legendary Dr. Osama Tezuka himself, the father of Japanese Manga and creator, to American audiences of the day, of ASTRO BOY!
Posted by Booksteve at 10:00 PM