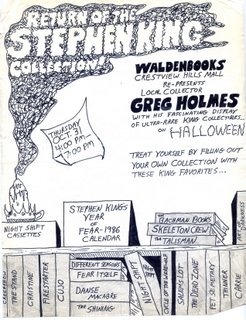 Here are a couple of Halloween flyers I did myself for my bookstore oh...jeez, more than 20 years ago now!!! One is for an in-store appearance by local Stephen King collector Greg Holmes who brought a nice selection of very rare King volumes to display. He also gave me a list that day of other titles King had supposedly written or at least started. Some had silly names like TOMMYKNOCKERS and I wasn't at all sure the list was accurate. Over the years, however, most of the titles were actually released! One I recall from the list that still has not seen the light of day was to be entitled BLACK MAGIC AND MUSIC. Another item on the list was THE PLANT, which King had been sending out in individual chapters to friends. Greg got me photocopies of the first two chapters. The second flyer seen here was my take on an EC-style comic book cover to promote a reading from the book SCARY STORIES TO TELL IN THE DARK. Bookseller Shana Bowling was a frustrated actress and put a lot of life into her reading that day. Last I heard (if I recall correctly) from her mother who continued to shop for years at the store, Shana had become a University Professor. Finally (and totally unrelated), to see out the scary stuff for awhile, here's

a nice shot of THE WIZARD OF OZ's 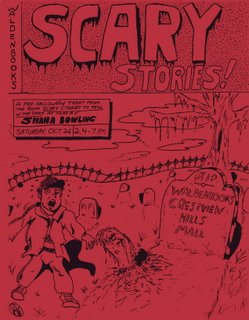 Wicked Witch of the West, Miss Margaret Hamilton, from a mid-seventies TV appearance. Peg Lynch, a radio actress who worked with Margaret Hamilton for years, assured me once that she was more like Cora the coffee lady than a witch.
Posted by Booksteve at 8:10 PM