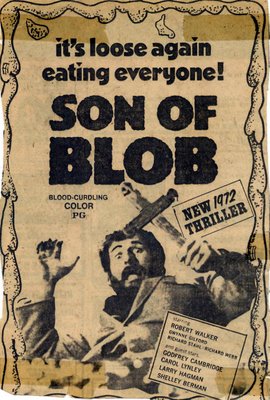 If you think you know actor Larry Hagman because you know him from I DREAM OF JEANNIE or DALLAS, you might be surprised to learn that the real Larry was/is one of the most eccentric people you might ever encounter. A tripped out, beachdwelling, martial arts practicing Bohemian back in the day, he was known for taking "silent days" where he would not talk under ANY circumstances and using a hand-held fan to blow smoke back in the faces of cigarette smokers who smoked around him. SON OF BLOB, the 1972 Hagman-directed movie later re-issued with the tagline, "The film that JR shot," probably shows the real Larry better than any other project did. More a comedy remake than an actual sequel, the picture is dotted with familiar faces like Robert Walker, Jr, Godfrey Cambridge, Dick Van Patten and the director's long-time (and equally eccentric) neighbor, Burgess Meredith. Essentially, there's this...well..."blob" of stuff left over from the first movie. It's revived, consumes anything and everything and black comedy hilarity ensues. A cheap but impressive directorial debut, it seems very much to have been done as a lark and if you go in expecting that, you'll enjoy it! Released also as BEWARE! THE BLOB, it shouldn't be that hard to find.
Posted by Booksteve at 11:19 AM