The House On Skull Mountain 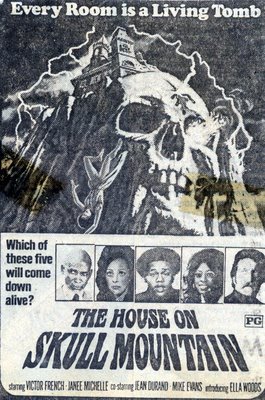 Here's another cool skull ad from yet another seventies horror film. This one is 1974's THE HOUSE ON SKULL MOUNTAIN, a strange hybrid of blaxploitation, voodoo and old-fashioned Agatha Christie style mystery. Victor French, best known as Michael Landon's sidekick on just about everything stars and the only other familiar face is Mike Evans who played Lionel on THE JEFFERSONS and earlier on ALL IN THE FAMILY. Fairly dull and with an almost TV-movie quality (not helped by the TV actors), this one rarely turns up anywhere anymore. As I said, though, the ad's pretty cool!
Posted by Booksteve at 10:54 PM