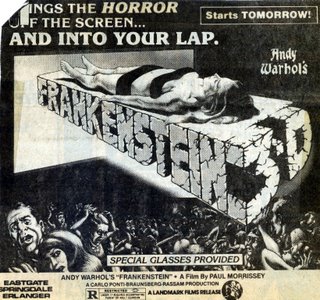 The other day my friend Terri took us to see the 3-D re-release of Tim Burton's NIGHTMARE BEFORE CHRISTMAS as a present for my son's 10th birthday. I went along for the ride but I had never seen 3-D. Not for lack of trying, you understand. I had been taken to some 3-D fairy tale movie when I was six and a half-dozen other films after that including the ubiquitous HOUSE OF WAX reissue. I couldn't see it. I became convinced that it was like the story of the Emperor's new clothes--no one could really see anything but no one wanted to admit that so everyone pretended that 3-D existed. This weekend...I saw 3-D!! It's real!! I swear it!! Not the movie, mind you but the brief introduction! I put on the glasses during the specially filmed intro and suddenly things started floating in the theater around me, not just on the screen! By the time that jack o'lantern in the box jumped out of the screen, I actually jumped back! The movie itself, though, not having originally been made in 3-D, had none of these amazing effects that I could see. It really, really made me want to see something truly made for 3-D. Something like maybe ANDY WARHOL'S FRANKENSTEIN! Saw it once on a non-3-D cable edit and didn't really care for it but now...! Who knows? 3-D RULES!!!
Posted by Booksteve at 9:09 PM