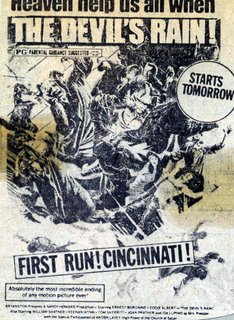 One of my more surprising "brushes with greatness" if you will is the fact that Anton LeVay, founder and High Priest of the Church of Satan, and I had a mutual friend. One of Anton’s rare on-screen appearances was in the 1975 horror film, THE DEVIL’S RAIN where he was also credited as a technical advisor.
Apparently, the folks who made up the ad seen here were under the impression that the film was entitled THE DEVIL’S REIGN or even THE DEVILS RAIN. It really is THE DEVIL’S RAIN, however, the apostrophe indicating the possessive as in "this rain belongs to the Devil." Thus the grating, ungrammatical wording in the ad that says "Heaven help us all when THE DEVIL’S RAIN." Sigh.
That said, the movie is remembered today as the feature film debut of (the barely seen) John Travolta. It is also cited occasionally as one of the films released by Bryanston, supposedly a mob-run releasing corporation set up to essentially launder the unreported profits of DEEP THROAT.
Underneath all of that you find a LOVE BOAT level cast that includes William Shatner, Eddie Albert, Ida Lupino and Ernest Borgnine as the Horned One, most of whom melt in the climactic scene of this devil-worship revenge tale. That scene, touted in the ad as "absolutely the most incredible ending of any motion picture ever!" really is memorable. The problem is that the rest of the film isn’t.In fact, the only other thing I recall is that the print I saw at the Ludlow Theatre on a Sunday afternoon in ’75 was terrible even though the film was still on its first run.
Posted by Booksteve at 11:24 PM