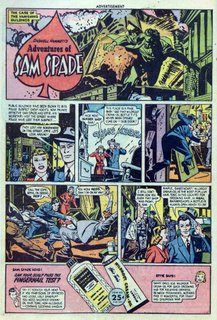 On the air in the late 1940's, author Dashiell Hammet's tough guy detective Sam Spade (he of MALTESE FALCON fame) was given a wisecracking makeover by actor Howard Duff. Duff played the role for several seasons and succeeded in making it his own. The series was sponsered by Wildroot Cream-Oil with a memorable jingle. In print, Wildroot was touted in comic strip ads by L'IL ABNER's "ideel," Fearless 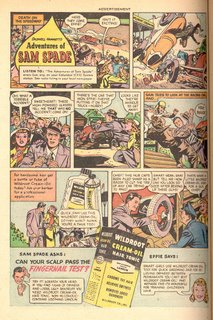 Fosdick and also by this variation on the radio Spade. These ads apeared regularly throughout the run of the series.
Posted by Booksteve at 11:26 PM