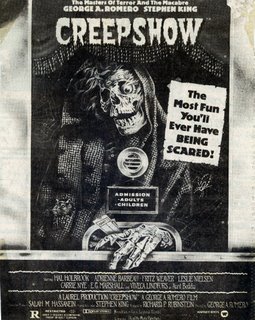 With a new Stephen King book on the stands this week, here's a look at the ad for 1982's CREEPSHOW, yet another skull faced horror movie poster. CREEPSHOW was a nod to EC Comics from King and director George Romero. Okay, more than a nod...an homage, perhaps? A rip-off? Either way, it works fine presenting as it does a TALES FROM THE CRYPT-style anthology of twist-ending terror tales with familiar stars such as Ted Danson, Leslie Nielsen, Hal Holbrook and Adrienne Barbeau. Even old EC artist Jack Kamen (whose son Dean would go on to invent the Segway PT) was dug up (figuratively) for the poster art. As with all good things, it was followed by a lesser 1987 sequel (notable only as Dorothy Lamour's final film), an undoubtedly even lesser 2006 collection (lacking even any participation from King and Romero) that I have not seen and threats of yet another variation to come. The ad's sure cool though!
Posted by Booksteve at 8:53 PM