A Devil of a Triple Feature 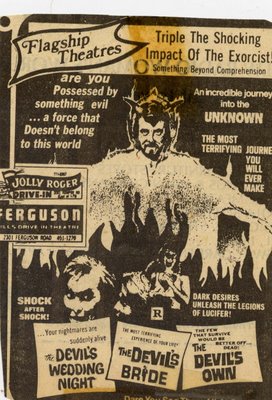 Here’s another horror movie triple feature from the mid-1970’s. It’s obviously from the mid-1970’s due to the consistent EXORCIST references in this ad. That said, the films themselves are older ones. THE DEVIL’S WEDDING NIGHT is a 1973 Italian film starring Mark Damon. THE DEVIL’S BRIDE is Hammer’s THE DEVIL RIDES OUT, the remarkable 1968 Dennis Wheatley thriller (scripted by Richard Matheson and directed by Terrence Fisher!) with Christopher Lee as a Dr. Strange type hero. THE DEVIL’S OWN is Joan Fontaine’s 1966 vehicle, THE WITCHES. This combination wasn’t very well thought out though. If they’d waited just a couple more years they could have put THE DEVIL’S BRIDE first, then THE DEVIL’S WEDDING NIGHT and followed it up with Hammer’s swansong, TO THE DEVIL, A DAUGHTER!
Posted by Booksteve at 10:26 PM