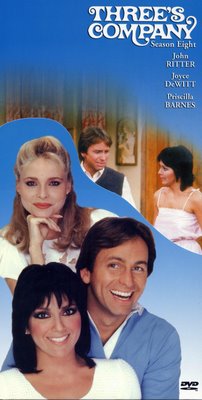 When you consider how popular THREE’S COMPANY was in its late seventies-early eighties heyday, it’s amazing how little respect the series gets. In fact, it’s rarely discussed at all without mentioning the behind the scenes clash of egos and finances that led to Suzanne Somers’ departure. This week’s Anchor Bay release of the final season, season 8, on DVD has given me the unique opportunity to be able to take the season on its own, distancing it just enough from the "Chrissy" years. Without that context, I was almost surprised to find that it really CAN be appreciated on its own.
At its core, THREE’S COMPANY is an old-fashioned sex farce, filled with misunderstandings, innuendo and double entendres—lots of smoke but no real fire. Played out as it is by a now seasoned cast of farceurs, the episodes sparkle with low wit and funny, well carried-off (if sometimes predictable) gags. Not since Dick Van Dyke tripped over his first ottoman has anyone does physical comedy as well as John Ritter.
The basic premise is that the landlord (the great Norman Fell in earlier seasons but here the even greater Don Knotts)thinks Jack Tripper is gay and thus allows him to room (separately of course) with two female roommates. That’s a mighty thin joke on which to build 8 full seasons (and two spin-offs) so if you think about it, the show was clearly doing SOMETHING right to maintain the high ratings it had for so long. The secret was the characters. As a farce, no one was expected to be realistic or believable but John (Jack) Ritter and Joyce (Janet) DeWitt nonetheless brought a true sense of deep caring and friendship to their roles by this point. Suzanne’s replacement, Priscilla Barnes, once one gets past the unfair comparison, is pretty, nice, funny and suitably likable in her role as the third roommate. She does NOT really offer the "jiggle factor" that Suzanne Somers brought to the series but that’s not really a bad thing. It’s replaced by genuine back and forth bantering humor that Chrissy the airhead could not have handled.
By this season, Richard Kline as neighbor Larry was appearing often enough in each episode to be featured throughout the opening credit sequence. Although his role as the smarmy disco era bachelor is one of the most stereotyped in the series, Kline himself makes the most of his opportunities and adds quite a bit to these later episodes. Rounding out the cast is Don Knotts as clueless landlord Ralph Furley with his loud outfits, bad toupee and leering, discomforting gay jokes. It ain’t Barney Fife but, hey…it IS Don Knotts and that alone goes a looong way in television comedy.
The season works its way through a number of typical sitcom misunderstandings before zeroing in on serious separate courtships for both Jack and Janet. This all would eventually lead to THREE’S A CROWD, the short-lived spin-off featuring Ritter’s character. First, though, is a suitably maudlin finale in which the friends all go their separate ways.The writing and direction tend to be a bit pedestrian but the veteran cast still milks the laughs so well that it’s hard to notice unless you’re looking for that sort of thing.
The late John Ritter, son of legendary cowboy star Tex Ritter, was a good actor. He proved it over and over again on TV before THREE’S COMPANY including a semi-regular stint as a young preacher in THE WALTONS. He was, however, particularly adept at the type of burlesque and pratfalls seen in this series. The problem is that that type of burlesque didn’t really turn up that often anymore on TV and certainly not in film. As such, in spite of a perfectly respectable post-Jack career, Ritter’s genuine flair for physical humor was rarely so well exhibited again. One of the extras in this set is a respectful and hilarious 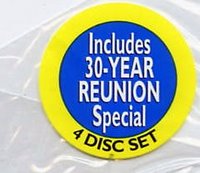 documentary on John Ritter and his gift for giving this special type of laughter.
Other extras include individual "best of" compilations for all 5 of the regulars and one of the longest blooper collections I’ve come across on any DVD collection (for those who like that sort of thing). As always, Anchor Bay delivers a quality product in quality packaging. In fact, my only quibble is with a label on that packaging that advertises the inclusion of a 30 year reunion special on one of the four discs. Either it isn’t really present or I simply can’t find it. If it’s there, it’s well hidden. If, in fact, it’s an easter egg it shouldn’t be touted as a selling point on the front of the box. Since all of the other advertised extras were present, I can't imagine that it's simply missing from my review copy. Anyway, that caveat aside, THREE’S COMPANY SEASON 8 has been making me laugh quite a bit in the last 24 hours. It’s actually made me wish I’d stuck with the show during the final seasons of its original run. Sorry, Priscilla. I see now that you did a great job in a tricky situation. My heart, however, as always, belongs to Janet. Thanks Joyce for making her so memorable. I hope to meet you (with Richard Kline) at the upcoming Mid-Ohio-Con.
THREE’S COMPANY SEASON 8 is just out. If you’re a fan, you need it. If you’re just looking for a good-- if slightly naughty--laugh here’s a box full of ‘em!
Posted by Booksteve at 12:04 AM