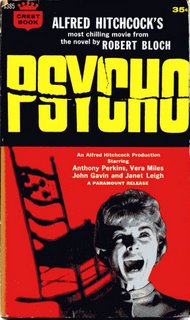 Many folks cite PSYCHO as Alfred Hitchcock’s best film and, in fact, one of the scariest films ever made. Others, myself included, consider the 1960 film that introduced the iconic Norman Bates to be actually a comedy. Oh, it’s the blackest of black comedies, mind you but this IS Hitchcock we’re talking about after all! Hitchcock and author Robert Bloch, a writer known also for his sense of black humor. Bloch’s 1959 novel (seen here in its movie tie-in edition), lacking the cinematic setpieces so artfully employed by the great director, is not in and of itself all that memorable.

PSYCHO the movie is, for all intents and purposes, a feature film version of TV’s ALFRED HITCCOCK PRESENTS. That black and white series was a TWILIGHT ZONE style anthology that often dealt in black comedy with EC (and O Henry and Saki) style twist endings. If that doesn’t describe PSYCHO, what does? Eventually, everyone learned WHY the theaters were not admitting patrons after the film had started (they might miss Janet Leigh entirely!) and Norman’s secrets got out. None of that changes the sheer cinematic rollercoaster of the film. Hitchcock had done his version and never looked back. Star Anthony Perkins later milked the Norman character for a number of interesting sequel films and author Robert Bloch even turned out literary sequels, too. At the end of the day, though, the average person remembers the original…and has nightmares. Hitchcock would’ve liked that.
Posted by Booksteve at 9:01 PM