Bits and Pieces and Linda Blair 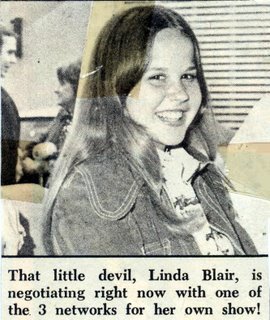 Here’s some leftover bits and pieces related to the horror fixation of this past month.
First up, it just wouldn’t be October without at least a cursory visit with Linda Blair. Unfortunately, I missed my chance for a REAL visit a couple weeks back. Seems she was less than 150 miles away hosting three nights of EXORCIST showings. Thanks to a helpful reader, I did get a heads up but it was too late to switch my work schedule. Sigh. Adding insult to injury, I found out that my new boss DID get to meet her a few years back at a trade show! She does a lot of appearances at this time of year so if you saw her, I’m sure you enjoyed the occasion. 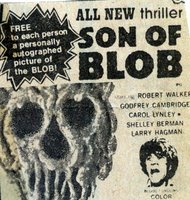 If you DO see her soon, tell her how much we adore her here at the Library. Here’s a pic circa 1976 indicating that she was then negotiating for her own TV series!


We did a piece on Larry Hagman’s SON OF BLOB earlier and I ran across this second ad in the archives. According to this, you got a free autographed picture if you attended...of the BLOB!! Watch for those on E-bay.

was a Rankin-Bass TV sequel (of sorts) to their puppet animated MAD MONSTER PARTY from the mid sixties. It aired on ABC’s SATURDAY SUPERSTAR MOVIE in the early seventies. This one was regular ol’ limited TV cel animation but had some cool character designs. Here’s a group shot of the cast. 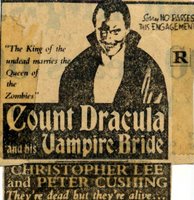 COUNT DRACULA AND HIS VAMPIRE BRIDE turned up quietly in limited US release some five or six years after it had played out in England as THE SATANIC RITES OF DRACULA. This was Christopher Lee’s last Hammer take on the character and was not that great a film. That said, it was better than several of the more famous films in the series and certainly didn’t deserve the pass Warner Brothers gave it years earlier. After spying the ads in a Lexington newspaper, I convinced my dad to take a bus to Lexington with me where we saw it at an inner-city theater improbably double-billed with Pam Grier’s FRIDAY FOSTER. Years later, it was finally restored and released by Anchor bay in its originally intended version.
Posted by Booksteve at 8:05 AM