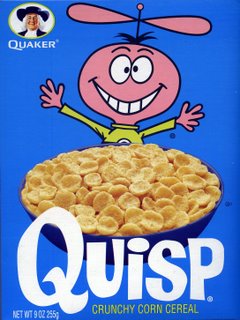 My favorite cereal in the late sixties was QUISP, the saucer-shaped cereal from Quaker Oats that competed with the similar (but differently shaped and marketed) QUAKE. The two cereals are best remembered for a memorable marketing campaign that pitted their namesake mascots against each other in a series of clever Jay Ward commercials for about six years. QUISP was a little pink alien with a propeller on his head voiced by the great Daws Butler. QUAKE was a big, tough, lantern-jawed miner voiced by William Conrad. They both offered cool prizes inside including my favorite, from QUAKE: a ring with a real bit of lava inside it! I wore it for about a year! QUAKE never sold as well and eventually was redesigned for some 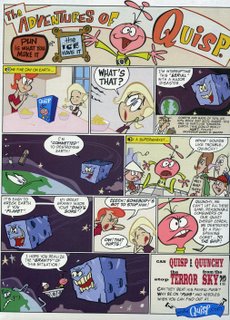 reason as a skinny gay stereotype in a cape and a cowboy hat (or perhaps as an Australian to go along with the new QUANGAROOS cereal but that made even LESS sense). In the end, QUISP won the long-running battle but without his nemesis, the public seemed to lose interest and QUISP, too, became a thing of the past...but not forever. It seems that in the 1990's, QUISP was reintroduced in limited areas with a big Internet marketing campaign! In fact, you can STILL find QUISP in some areas even today in the new century! I got two boxes in Ohio last week. They still taste good, too, but they aren't LUCKY CHARMS. Check out Quisp.com for yourself! Wonder if they've considered marketing QUAKE exclusively in Australia?
Posted by Booksteve at 4:44 PM