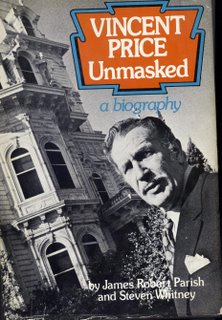 Vincent Price. Growing up in the sixties and early seventies, Vincent Price was everywhere. He starred in several horror films per year, guest starred in everything from westerns to beach party pictures, turned up regularly on television variety series and game shows such as HOLLYWOOD SQUARES and even dropped by occasionally to menace the stars of TV series such as BATMAN and THE BRADY BUNCH. "Uncle Vinnie" was seen so much he really was

like a member of the family. For every time you saw him kill someone, you saw ten times as much singing or joking from him. A popular character actor in the forties, he rose to full stardom on radio and in B movies of the fifties. Roger Corman’s long series of Edgar Allen Poe inspired pictures of the sixties, cemented Price as the new, modern King of the Horror Film. By the seventies, his career had reached a safe plateau and nothing could diminish his status as an icon, even appearances in lowbrow imports such as PERCY’S PROGRESS (or IT’S NOT THE SIZE THAT COUNTS in the US) about the world’s first penis transplant. He entered into a bizarre but apparently happy marriage with Coral Browne (one of his victims in 1974’s THEATRE

OF BLOOD), toured extensively as Oscar Wilde and ultimately finished his career as the "father" of EDWARD SCISSORHANDS, written and directed by his life-long fan Tim Burton.
Halloween time is a good time to remember Uncle Vinnie. Seen here are the four best books I know of about Price. The first, VINCENT PRICE UNMASKED hit the shelves in the mid-seventies when Price was just starting to slow down a bit. VINCENT PRICE, A DAUGHTER’S BIOGRAPHY appeared in 1999 with a number of controversial revelations about Price, the very human man. THE COMPLETE FILMS OF VINCENT PRICE by Lucy Chase Williams from 1995 is one of the very best of the legendary Citadel film series books offering as it does detailed synopses, reviews and analyses on even the most minor appearances, peppered with color posters and lobby cards as well a swell chosen stills and publicity shots. Although smaller in size, the more recent 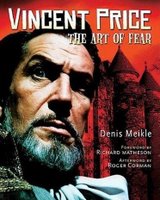 VINCENT PRICE: THE ART OF FEAR almost matches it for content and well-chosen illustrations. If you’re like me, you can pull one of these volumes off the shelf this time of year. If not, hit your local library and get one. Vincent Price was a fascinating individual as well as an enjoyable performer. Thanks, Uncle Vinnie. You may not have been perfect but we still miss you.
Posted by Booksteve at 11:08 PM