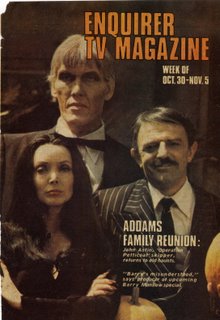 I love TV series reunion shows, no matter how simplistic or badly done they turn out! HALLOWEEN WITH THE NEW ADDAMS FAMILY aired in 1977. The only original TV ADDAMS FAMILY appearance in color, it's hindered by the cheap looking video on which it was shot. The cast (all except Blossom Rock returning) are wonderful to see in character again, though, particularly John Astin as the manic Gomez and Carolyn Jones as the slithering Morticia. Even my later friend from the radio conventions, Parley Baer, who was almost a semi-regular on the series, returned here as a gangster. There would be cartoons and feature films and reruns galore but to me, THE ADDAMS FAMILY series represents a time and place where the macabre and comedy and a true sense of family all came together to help form the six year old I was into the man I became. This reunion, even with its flaws, was a nice reminder of that.
Posted by Booksteve at 12:01 AM