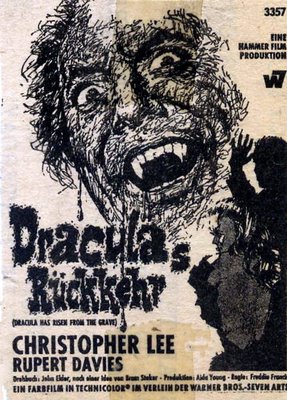 This is a really nifty and different German poster for 1968's Hammer horror, DRACULA HAS RISEN FROM THE GRAVE. Christopher Lee appears as the Count (although one hesitates to say he "stars" as his screen time is limited.) and Rupert Davies is his holy adversary. The lovely Veronica Carlson is the featured neck model. Some posters even featured a closeup of her neck with a modern band-aid on it. In spite of that and the tagline that said "You can't keep a good man down," DRACULA HAS RISEN FROM THE GRAVE is one of the better films in the Lee series. Directed by cameraman Freddie Francis (after Terrence Fisher had to bow out), it featured impressive sets and a more exciting than normal story for this type of picture. As with nearly all of these pictures though, you're left wanting one thing--more of Christopher Lee.
Posted by Booksteve at 11:08 PM