Movies That Fell Through the Cracks # 20 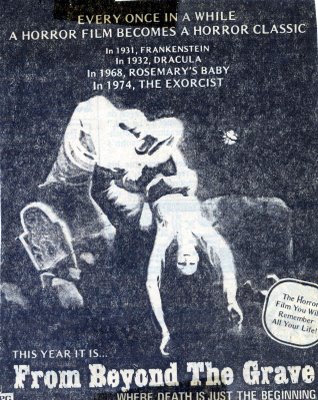 FROM BEYOND THE GRAVE is not a bad movie at all. In fact, the main reason I classified it as a movie that fell though the cracks is because of its egotistical US advertising. "Every once in a while a horror film becomes a horror classic. In 1931, FRANKENSTEIN, in 1932, DRACULA, in 1968 ROSEMARY'S BABY, in 1974, THE EXORCIST. This year it is...FROM BEYOND THE GRAVE." Ummm...yeah. FROM BEYOND...hmmm...Nope. Never heard of it. And I actually SAW the danged thing!!! "The horror film you will remember all your life," says the ad. Apparently not. I recall that, even though you get no clue from this ad, it was actually yet another of the Amicus anthology films patterned on DR. TERROR'S HOUSE OF HORROR. I recall that it featured a nice friendly performance by Peter Cushing (again) as the kindly but mysterious proprietor of a curio shop. That's...about it to tell you the honest truth. A look at IMDB does nothing to remind me of the plots of the four stories included but it does tell me there was a good cast including Donald Pleasence, David Warner and Lesley-Anne Down. I don't recall them in it mind you but...On top of everything else, the film was clearly released in the US a few years later than its 1973 IMDB date as witness the 1974 EXORCIST reference! It sounds like a good movie. Wouldn't mind seeing it...again...someday.
Posted by Booksteve at 5:06 PM