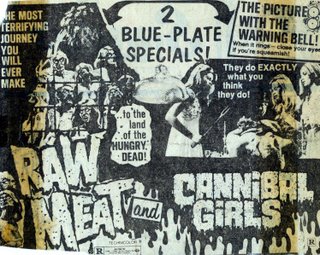 Here's a disgusting but cool double feature from the early seventies. RAW MEAT, also known as DEATH LINE, is only now getting discovered as a cult horror film. It deals with a group of inbred, underground dwellers who feast on their own dead. Donald (HALLOWEEN) Pleasance stars with Chris Lee in a cameo. The real treat here, though, is the Canadian CANNIBAL GIRLS and not just because of the William Castle-style "warning bell" mentioned in the ad. CANNIBAL GIRLS was made by a number of future SCTV folks including GHOSTBUSTERS director Ivan Reitman. Andrea Martin and Eugene Levy star, both fresh from the legendary Canadian stage version of GODSPELL. With Levy more recognizble today than ever in films like AMERICAN PIE, SERENDIPITY and A MIGHTY WIND, it's strange to realize that he has, in fact, been starring in movies for more than thirty years now!!
Posted by Booksteve at 11:06 PM