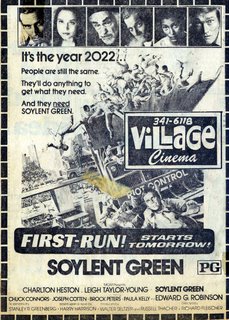 "SOYLENT GREEN IS PEOPLE!!!" Okay. There. I’ve said it. Now can we forget that pop culture punchline for a minute and consider the movie itself? I first saw

SOYLENT GREEN on Good Friday in 1973. I was in the eighth grade and we were released from school at noon. I rushed to catch a bus into downtown Cincinnati to catch the 1 PM matinee at the International 70 theater (you go to your house of worship, I’ll go to mine). I even recall that after taking the bus back across the river later on the way home, I picked up coney islands (a Cincy delicacy) for dinner, then walked the last six and a half blocks. (You regulars know I have a freaky memory!) Even now, I consider this an extraordinary film. The basic plot, taken from the novel MAKE ROOM, MAKE ROOM! by former EC comics artist (and later creator of THE STAINLESS STEEL RAT) Harry Harrison, deals with a near future US in which the population explosion has become nearly impossible to control. Future NRA nut Charlton Heston, himself the

picture of vitality and health, seems horribly miscast in a world where there is so little food that stolen strawberries 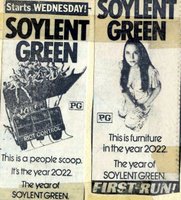 are a rare treat. That said, he gives a good performance nonetheless, topped perhaps only by Edward G. Robinson in his final movie. Robinson plays Saul, Heston’s character’s "Book." In this future dystopia, people prostitute themselves out. Thus, as his Book, Saul acts as the detective’s research assistant and conscience. It’s a surprisingly subtle performance from one of the great screen tough guys that also includes the second of his two memorable on-screen death scenes. The first, of course, was in 1930’s LITTLE CAESAR ("Mother of Mercy! Is this the end of Ricco?"). Here, Saul learns the secret of the miracle food everyone loves and how it ties in to the murder they’re investigating and he realizes he can no longer live in the world in which he finds himself. He decides to "go home." In this case, that means being euthanized in a sterile, personalized environment with your favorite music (here including Beethoven’s Pastoral, a personal favorite of mine), imagery, tastes and smells. A lovely scene. Joseph Cotton is the murder victim. The late Brock Peters (Darth Vader in the NPR STAR WARS series) is Heston’s boss. Leigh Taylor-Young and Paula Kelly are "furniture," in this case a girl that goes with the apartment for those who can afford it. TV’s RIFLEMAN, Chuck Conners, 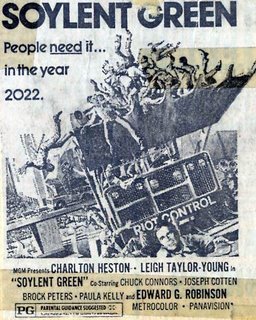 is a villain. Great character actors like Lincoln Kilpatrick, Dick Van Patten and Whit Bissell dot the edges of the picture and the ancient Celia Lovsky, former wife to Peter Lorre, even appears! Director Richard Fleischer keeps the story barrelling pretty straightforwardly to the conclusion but the set pieces along the way are well done and perhaps a little too close to home for comfort. The scenes where the big machines do crowd control are still scary. I’ll be honest with you, though. The eventual resolution about Soylent Green actually seems like the ultimate form of recycling. The story takes place in 2022. That’s only 16 years from now. I wouldn’t be surprised if someone somewhere was working on a variation of that very idea right now.
Posted by Booksteve at 7:38 AM