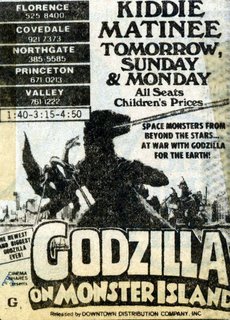 This ad for GODZILLA ON MONSTER ISLAND is from a 1972 "kiddie matinee" release. By that point, I was 13 years old and certainly wouldn’t be caught dead at a kiddie matinee…except that this WAS a Godzilla movie and, in fact, for all intents and purposes appeared from the TV commercials to be a retitled DESTROY ALL MONSTERS, a film I had always wanted to see. Thus it was that I grabbed my friend Terry (also 13) and we sauntered down the sticky floors of the local theater that Saturday afternoon. Now if you’ve never been to a kiddie matinee, it was a real experience. First of all, very few people went to see the movie. It was a social experience. In fact, many times the theaters left the house lights on all during the movie. There was screaming, dancing, grade school flirting, popcorn throwing, pulling girls’ hair, shooting things at the screen through straws and just being seen. When you were as sophisticated as we film buffs, however, this was all a major detriment to the enjoyment of the matinee itself. In this particular case, an even bigger detriment was the fact that it wasn’t DESTROY ALL MONSTERS after all, just a patchwork quickie monster movie featuring lots of stock footage from other Toho films and TALKING monsters!!! I learned a hard lesson, though. No matter how much I wanted to see the movie involved, I never again attended a kiddie matinee after that.
Posted by Booksteve at 8:28 PM