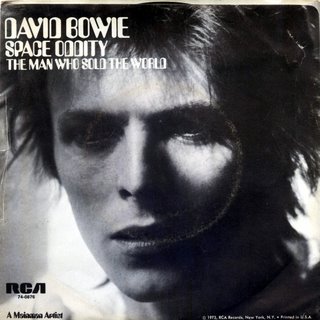 In 1973, I was a 14 year old comic book geek and straight A student in ninth grade with bad skin and no girlfriend. I liked the already defunct Beatles, Elvis, Ray Stevens and AM Top 40 radio. Then I discovered David Bowie. I heard the re-release of Bowie's SPACE ODDITY a few times on the air and I had no idea it wasn't brand new. It was the story of hapless astronaut Major Tom and "something" that happened to him in space.It sounded like nothing I had ever heard on the radio before. I bought the record (89 cents at JC Penny) but I almost felt guilty, as if I was getting involved in something illicit. On the picture sleeve, Bowie certainly didn't look like David Cassidy or Bobby Sherman or even Dean Martin. He looked...well, not really alien just...freakin' weird! His hair, his eyes, everything. I kinda hid the record from my parents. I played it a lot, though, revelling in the unusual, nontraditional story song and its flip side, THE MAN WHO SOLD THE WORLD with its cool building guitar sound (Mick Ronson?) later covered almost note for note by Nirvana. I didn't know a thing about Bowie's androgeny or Ziggy or drugs or anything at all except the record...but that was enough. Bowie's uniqueness exuded from that record even without the background knowledge. It didn't change my skin condition or my lack of girlfriend but, from there, little by little and right along with the pop mainstream, I discovered a different type of music: Elton, Lou Reed, Iggy Pop,, Ramones, Costello, Blondie. I returned to Bowie over and over as I watched him chameleon to the times as others fell on the fickle battlefields of pop success. For years, I still felt a weird sort of feeling when I saw that picture sleeve, nestled neatly in with everything from Lawrence Welk to Simon and Garfunkel but now it holds a special place here in the Library as the beginning of my appreciation of diversity in music. Thanks, David.
Posted by Booksteve at 8:01 PM