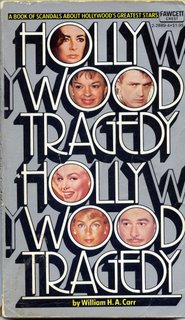 I had to take my wife to the ER today (She’s okay. Don’t worry) so I grabbed a book from my Library to read during the expected long wait…which came. The book I grabbed was HOLLYWOOD TRAGEDY by William H. A. Carr from 1976 (although there’s an additional copyright for 1962 so some of this may have been reprints). Sort of a HOLLYWOOD BABYLON light, this book offers detailed sections on the usual suspects—Monroe, Dean, Arbuckle, Lupe Velez and Garland—but also covers Bruce Lee, Ingrid Bergman, Lana Turner (whom you’ll recall changed my life. See SEARCH THIS BLOG above), Errol Flynn, Mary Astor, Chaplin and Sharon Tate. Even celebrity footnotes like Paul Bern get a whole chapter. Not nearly as exploitative as Kenneth Anger’s legendary book (which had then just had its first US publication) the author gets in a few digs at Anger in discussing his vague Manson family connection. Although it seems factual for the most part, the chapter on Velez offers a different view of her suicide than the more well-known version exploited in BABYLON (and the underground comic SLEAZY SCANDALS OF THE SILVER SCREEN). In discussing Sharon Tate, she’s described as being a consistently emotionless actress despite one of her final roles being the sexy, hilarious, klutzy spy girl in Dean Martin’s Matt Helm movie, THE WRECKING CREW. Still, there are more details than usual in many of the chapters, sensationalized only a bit. A quick and interesting read for a true film buff and you don’t feel like having to wash your hands the way you do after Anger’s books (and yes, I have them here in the Library, too!).
Posted by Booksteve at 3:43 PM