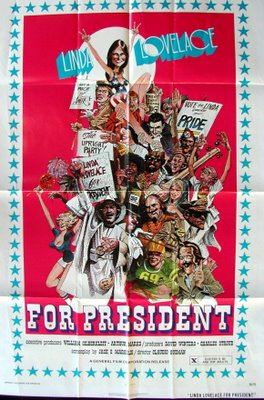 Linda Lovelace was and remains a fascinating subject for a number of reasons. We are NOT writing about her today, however. Instaed, we're here to discuss LINDA LOVELACE FOR PRESIDENT, the cinematic skeleton in the closet of a number of pop culture icons! LINDA LOVELACE FOR PRESIDENT was made in 1975 in a certainly shameless attempt to extend the legendary porn star's fifteen minutes of mainstream fame. No actual sex here for he former DEEP THROAT star, just tons of junior high school innuendo. What's always intrigued me, however, is the sheer number of talented pop folks who got themselves tangled up in this badly made mess!
Here are just a few:

Mickey Dolenz-Several years past the Monkees and not yet safely ensconced as a successful TV director in England, the sadly neglected singer was at a personal low when he appeared in a running gag as a bus driver.
Scatman Crothers-Musician, actor and cartoon voice of HONG KONG PHOOEY, the ingratiating Scatman was still a few years away from big budget films like TWILIGHT ZONE-THE MOVIE.
Robbie Lee-What, you’ve never heard of her? She was one of the two violent (and usually naked) daughters of Angie Dickinson’s character in the cult classic BIG BAD MAMA!
Chuck McCann-Legendary nice guy kids’ show host and character actor known for his impression of Oliver Hardy and his classic sixties Right Guard commercials ("Hi, guy!") with Joey Forman.
Joe E. Ross-"Ooo! Ooo!" Ross was a former burlesque comic who became beloved on TV as Gunther Toody on CAR 54 WHERE ARE YOU? And later as Gronk on the sadly forgotten (except for the theme song) IT’S ABOUT TIME.
Vaughn Meader-a charismatic man with the worst timing in show biz history. Meader was absolutely hilarious on the legendary FIRST FAMILY album spoofing the Kennedys in the early Camelot years. After November of 1963, of course, he was out on the streets. His attempts at non-political humor fell on deaf ears and according to some accounts, he went a little nuts. Except for some "Whatever happened to…?" pieces, this was his last pathetic attempt.
Claudio Guzman-the director helmed episodes of most of the great TV series of the sixties, perhaps most notably, I DREAM OF JEANNIE.
Marty Ingels- a storied eccentric, cartoon voice and character actor who was the voice of Pac-Man to a generation (and was improbably married to Shirley Jones during that same period). These people are the kind of folks who are enjoyable even in terrible movies. They're enjoyable here, also...for the most part...and even as an exploitation movie, you don't get much more terrible than LINDA LOVELACE FOR PRESIDENT.
Posted by Booksteve at 6:15 PM