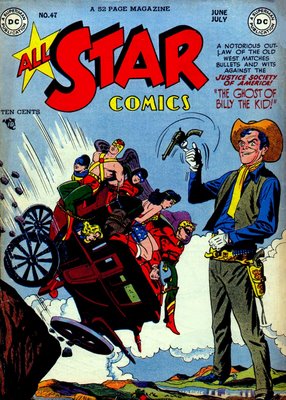 I never met him but I always kind of idolized Dr. Jerry Bails who died today at 73. I think its safe to say that comic book fandom as we know it would not exist if not for Jerry. So great was his influence amongst fans and pros alike that it's probably a safe bet to say that comic books themselves as we know them might not exist if it had't been for Jerry. Jerry's childhood appreciation of the Justice Society of America led him as an adult to correspond with creator Gardner Fox and Editor Julius Schwartz who were very open to his suggestions. A lot of the comics blogs will give more of the specifics but here's a link to a 2004 interview with the man himself:COMICON.com: OF FANS & FANDOM: THE JERRY BAILS INTERVIEW Rest in Peace, sir...and a belated thank you.
Posted by Booksteve at 6:45 PM