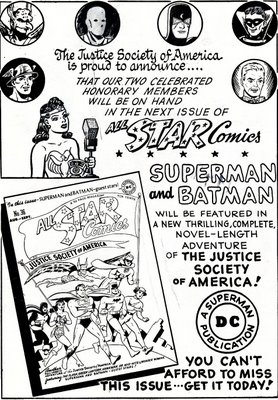 Traditionally, one thinks of Superman and Batman as members of the Justice Society of America but in actuality the World's Finest friends appeared participated in only one actual adventure. This inside cover ad from a 1947 WONDER WOMAN heralds that historic appearance. The real reason probably has something to do with the fact that Supes and Bats were technically DC characters while the JSA featured characters published by DC's "sister" company, All-American Comics. After Max Gaines' death around this time the two companies fully merged.
Posted by Booksteve at 7:38 PM