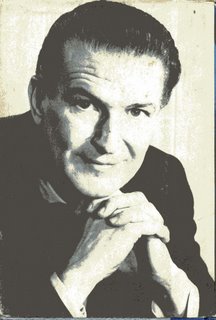 In pop culture terms, Clayton "Bud" Collyer had four different identities. I first discovered him as the genial, rather straight-laced host of my favorite game show as a kid, TO TELL THE TRUTH. For those of you too young to remember (and those who didn’t c

atch its overnight reruns on the Game Show Network in recent years), this was an intellectual game show. It was a panel show in which four celebrities using limited questioning and instincts attempted to determine which of three contestants, all of whom claimed to be a certain person, was the real McCoy. My mother watched it nightly and I became addicted, too. Bud seemed like a nice guy!
Unbeknownst to me at that time was that Bud Collyer was also…SUPERMAN! In fact, even as I was enjoying his game show, he was voicing the Man of Steel on the mid-sixties cartoon revival from Filmation. He had previously voiced the character in the classic Fleischer cartoons of the early forties, a gig he got due to the fact that he was SUPERMAN on the long-running Mutual network radio serial! According to legend,

he had won that role by virtue of just how far he could instantly drop his voice from Clark Kent to Superman! Using that voice, it was he who made famous the catchphrases, "Up, up and away!" and "This looks like a job...for Superman!."
A lesser-known aspect of Bud Collyer was that he was a very devout Christian and, in fact, author of two religious books! The book here, WITH THE WHOLE HEART, was published in that same, busy year of 1966. It was about twenty years later when I found this particular autographed copy on the shelf of a musty used bookstore. Bud Collyer-Game Show Host, Mild Mannered Reporter, Super Hero and Christian Author, died in 1969.
Posted by Booksteve at 7:30 PM