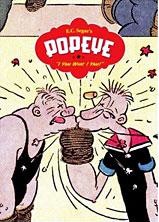 One of the most wondrous things about the age in which we find ourselves is that the once lowly newspaper comic strip is now at long last given its due as an art form and little by little, the true classics are coming back into print. The current case in point would be POPEYE by E. C. Segar. The first of a series of handsome tabloid-sized volumes presenting the original dailies and Sundays is just out and we highly recommend it.
It took nearly ten years before the one-eyed sailor man even appeared in THIMBLE THEATRE, a pre-jazz age comic strip showcasing the adventures of one Castor Oyl and his friends and family. Despite the historical significance of a volume reprinting those undoubtedly worthy strips, publisher Fantagraphics has wisely—at least from a marketing viewpoint—chosen to begin with that first storyline involving Popeye. We do see a bit of what the strip was like earlier as the storyline begins 27 pages prior to Popeye’s debut. Castor Oyl is presented a magic Whiffle Hen which he tries at some length to kill, then sell, but the bird keeps returning to him. Ultimately, he and friend Ham Gravy rent a ship and need a crew which is where Popeye comes into the picture.
Strangely, that first appearance is presaged by an early panel in which Castor yells, "I’ll be pop-eyed!" and then by the brief appearance of a tramp who resembles the later star of the strip!
Also in this initial volume is Castor’s sister and Popeye’s future paramour, Olive Oyl as well as the first appearance of the Sea Hag, originally one of the scariest strip villains of them all!
Visually and verbally inventive, Segar’s run on THIMBLE THEATRE stands with the work of the best humorists of the early twentieth century. In fact, as times have changed, much of the prose humor of the period doesn’t really hold up all that well but this strip is at turns exciting, amusing and endlessly ingratiating. In almost no time, Popeye takes center stage at the THIMBLE THEATRE never to relinquish it again. It’s about time whole new generations will get to discover the wonder of one of the very best comic strips and the true, unexpurgated version of a character they THINK they’ve known for years.
Posted by Booksteve at 6:27 PM