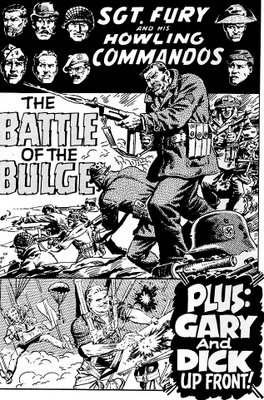 It’s Veterans Day again. Time to (metaphorically at least) quaff a few root beers with Snoopy and Bill Mauldin. In my case this year, I’ve been reading a long run of Marvel’s SGT. FURY AND HIS HOWLING COMMANDOS. Termed "the war mag for people who hate war mags," SGT FURY is violent, poignant, cliched, and generally very enjoyable. Ostensibly more realistic than say, BLACKHAWK, it’s pretty much the same setup. Seven (later eight) guys from various backgrounds and nationalities pretty much winning the war by themselves in true John Wayne fashion and wisecracking their way through Europe and Asia. Created by Jack Kirby and Stan Lee, the early issues establishing the characters were based on the artist’s love of old movies (and probably more than a bit of influence from TV’s then-popular COMBAT). Kirby’s regular Marvel inker from the period, Dick Ayers went on to become the chief penciller on the series and youthful Gary Friedrich took over the reins as writer for several peak years offering a decidedly sixties perspective on the WWII setting of the series.
My all-time favorite issue is the 1968 Annual. Set in then-present day, it tells of S.H.I.E.L.D.s Colonel Fury reuniting with all of the Howlers at Christmas at sidekick Dum-Dum Dugan’s house. During the course of the day, he tells the kids in the house old war stories including the ultimate Howler triumph at the Battle of the Bulge. Friedrich and Ayers, aided and abetted by the supreme inks of the legendary John Severin, pull out all the stops for this one. After a nice, quiet ending, we even get a short humor piece about the creation of the book itself as done by the same folks! Ayers and Friedrich, it should be noted, are scheduled to appear at Mid-Ohio-Con in a couple weeks, veterans reunited themselves for the first time in many years. If you’re near Columbus, yell "Wah-Hoo!!" and head over to the Convention Center to see ‘em interviewed by Mark Evanier and Tony Isabella.
Posted by Booksteve at 9:03 PM