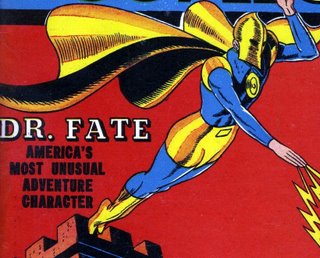 In the sixties, perhaps because of a general renewed interest in mysticism, Doctor Fate was coolness personified. In his all-too infrequent DC appearances (he was, after all, one of the "retired" Earth 2 heroes) he looked cool, acted cool and, with the possible exception of the Spectre, you just knew he could take anybody else in the room and kick their metaphysical butt! If Fate appeared in a comic, that comic’s trade value amongst us kids was doubled. Hard to believe that he was pretty much an also-ran in his original 1940’s run in MORE FUN COMICS. The sixties version was based more-or-less on the early Fate stories. After awhile, somebody decided they didn’t like the helmet and the half helmet look was born. With it, the pretentious magic-themed stories and dialogue were gone. While these 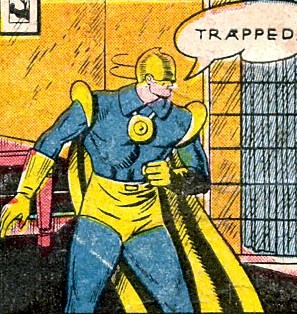 stories have rarely been reprinted, even they were supplanted by the final forties version of Doctor Fate, still with the half helmet but now sans cape and even without his goofy shoulder-thingies. In that form, he was just a slightly magical run-of-the-mill crimefighter who, because of his color scheme, strongly resembled Jack Kirby’s Guardian.

The continuity-wise kids of the sixties were given some half-hearted explanation for all of this even though they didn’t actually remember the original stories anyway. Over time, Fate got more and more mystical and his continuity got so convoluted that his worst enemy probably wouldn’t even recognize him. They keep reviving him in one form or another, though, because the folks running the industry today are the fans of yesterday. And yesterday, Doctor Fate was cool.
Posted by Booksteve at 5:39 PM