Superman and the Mole Men 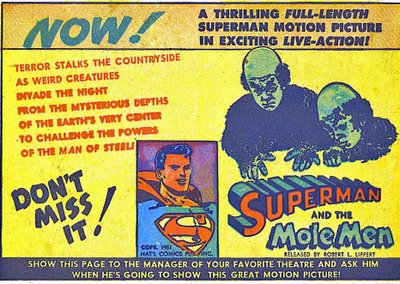 Here's a rare comic book ad for the 1951 SUPERMAN AND THE MOLE MEN movie. A short film made an a very low budget, this film followed the two Kirk Alyn serials and introduced George Reeves in the role. Whether or not it was intended to do so, it served as the pilot for the subsequent (and now beloved) TV series, THE ADVENTURES OF SUPERMAN. Reeves is perfect right out of the gate, authoritative as both the Man of Steel and supposedly mild-mannered reporter Clark Kent. Although paced rather slowly and featuring some pretty heavy (for the time) anti-racism themes, the movie was later edited down to fill two half hour episodes of the series. More recently, its resurfaced on DVD in its original form.
Posted by Booksteve at 5:16 PM