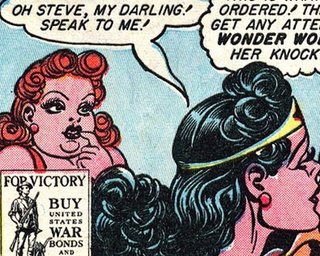 Sidekicks. You gotta love ‘em. I presume the original dramatic intent of the sidekick was to enable the hero to have someone to whom he could extrapolate on the plot without talking to himself. As early as DON QUIXOTE we had the introduction of the COMIC sidekick whose additional duty was to add a moment or two of levity to an otherwise serious story. As comic books developed as a unique art form, it was probably inevitable that the sidekick would turn up. The most notable early example is, of course, Robin, the Boy Wonder. Robin’s introduction to the BATMAN mythos changed the tone of the series considerably, lightening it up even as he gave Batman someone to converse with. Child sidekicks became the order of the day with Bucky, Toro, Sandy and even Roy the Super Boy. All but forgotten today, however are the more traditional, theatrically influenced comic sidekicks favored by DC (and its companion company All-American) throughout the 1940’s.
One of the most famous would be WONDER WOMAN’s sidekick Etta Candy, the short, plump, chocolate-loving sorority girl who teamed up with the amazing Amazon almost from the beginning. Much has been written about the sexual overtones (and undertones) of Dr. Marston’s early WONDER WOMAN stories and Etta figures prominently in that controversy. She’s constantly tying people up (often Diana) and quoting the Amazons’ talk of "loving submission" even as she seems more loyal and loving to Diana than that sexist, bull-headed Steve Trevor (what did she EVER see in him?). The character changed little 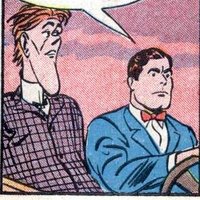 over the years and eventually was pretty much phased out after Marston’s death. Later writer Bob Kanigher used her a few times in the sixties but the weird vibe was gone.
WILDCAT, who shared SENSATION COMICS with the awesome Amazon, had a country bumpkin manager/sidekick named Stretch. Hillbilly humor was big in those days on radio and in Vaudeville and would culminate in the sixties with 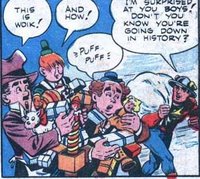 THE BEVERLY HILLBILLIES. By that point, WILDCAT was appearing only occassionally in JLA and THE BRAVE AND THE BOLD and Stretch was forgotten.
Meanwhile, THE FLASH had the 3 Stooges…sorta. Winky, Blinky and Noddy were omnipresent in FLASH stories both in FLASH COMICS and ALL-FLASH. Apparently, the short comic trio were popular enough to merit their own series in COMIC CAVALCADE! One appearance with the Barry Allen FLASH was enough to convince writer Gardner Fox to leave them in the past.
VIGILANTE had Stuff, the Chinatown Kid. JOHNNY QUICK had Tubby. THE CRIMSON AVENGER had

Wing who didn’t even get counted as one of the SEVEN SOLDIERS OF VICTORY in spite of appearing in every single adventure in LEADING COMICS. GREEN ARROW’s non-comic sidekick, Speedy, got counted. So did THE STAR-SPANGLED KID’s adult comic sidekick, Stripesy. Not Wing, though. This would, of course, lead to a memorable JLA mystery decades later.
One of the more famous comic sidekicks was

"Doiby" Dickles who appeared regularly with GREEN LANTERN (at least until he was replaced by a dog in very late stories) in the forties and even in some of his sixties revivals. Seemingly patterned on actor Edward Brophy who often played Brooklyn-accented cabbies just like Doiby, the resiliant Dickles was, with the possible exception of the similar Woozy Winks in Quality Comics’ PLASTIC MAN (himself later a DC character) the most popular of these bit players.
The most unlikely hero to have a comic sidekick, however, was Jerry Siegel’s avenging ghost, 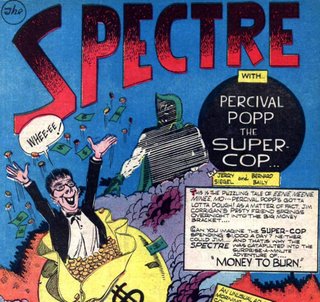 THE SPECTRE. There he was though, appearing regularly once he made his debut—Percival Popp, the Super Cop! I first heard of Percy in a DC text page Fact File circa 1970. An Arnold Stang kind of nebbish, Popp arguably fit in MORE FUN COMICS better than THE SPECTRE himself but WTF!!?? The character was usually the impetus for trouble by trying to prove his worth as a detective and the ghostly hero known for turning people into candles and watching them melt away was often reduced to being a guardian angel. The stories were kinda fun but still…THE SPECTRE??!!! Sigh. Oddly, to the best of my recollection, Percival Popp has never, in any revival of that series, been seen nor heard of again. Note the plug for the undoubtedly comic sidekick Fatman appearing with MISTER AMERICA, too!

In these days of dark, grim and gritty characters and equally morose storytelling. Maybe someone ought to consider some sort of Crisis that revives the comic sidekicks. Say! That’s it! Hey, Mr. Levitz! I got yer next big crossover right here! Call me!
Posted by Booksteve at 7:17 PM