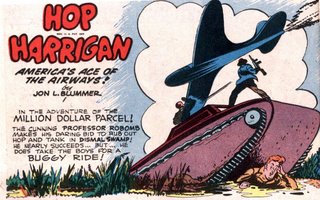 DC’s most forgotten hero would have to be HOP HARRIGAN. HOP HARRIGAN was an early aviation strip about a blonde, handsome young pilot and his chubby sidekick, "Tank." Inspired by various newspaper pilots (and even presaging Caniff’s STEVE CANYON to

some extent), the strip was created, drawn (and written?) by Jon L. Blummer and ran in ALL-AMERICAN COMICS beginning in 1939. Although relatively undistinguished except for its aviation art, it was popular enough to merit monthly inclusion in COMIC CAVALCADE a few years later also alongside WONDER WOMAN, FLASH and GREEN LANTERN. By that time there was a war on and Hop had enlisted, making the strip at times very similar to TERRY AND

THE PIRATES. Like most war-themed strips during the Big One, Hop’s popularity soared as high as his plane could fly leading to a six year radio series at ABC and later Mutual, right down the hall from SUPERMAN! By contrast, BATMAN never had a radio series, appearing only as a sometime guest-star with his Kryptonian friend. What’s that I hear you saying? Batman at least had has own serials! Well, so did Hop with fifteen chapters beginning in 1946. He even had an extremely popular fan club. That’s just it. For all intents and purposes, at one time Hop Harrigan was as popular as they came in comics. It’s just that no one seems to know him today. Sigh.
Posted by Booksteve at 7:13 PM