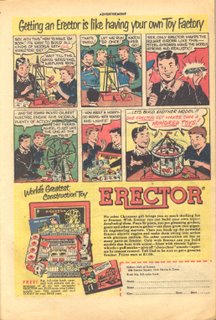 Well, Christmas is coming as it usually does at this time of year. When I was a child, one of the most wanted (read: most widely marketed and advertised ) toys was an Erector Set. Oddly, I never got one. I knew kids who had them but I never had one of my own. When I saw them, they seemed complicated and confusing. I did want one, though. Perhaps the reason I never got one was that the company that made them declared bankruptcy in 1967 and they were picked up by a competitor. It wasn't long after that that I hit puberty and finally got one of my own. Sorry but the jokes just tend to write themselves on this one...which may well be another reason they faded from popularity in the more sexually-aware sixties.
Posted by Booksteve at 7:12 PM