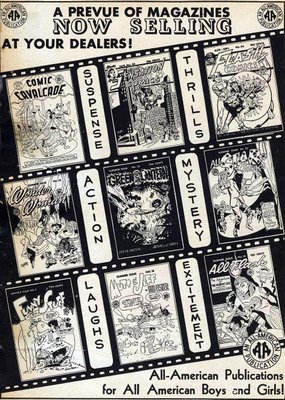 Here's yet another cool house ad, this time from the All American Comics company. Although we think of them as DC characters today, Flash, Green Lantern, Wonder Woman and the Justice Society were all actually published by All-American, a sister company to DC (which published Batman and Superman). It was kind of like the deal that DC has with some of the smaller companies today. There were some crossovers and cross promotion but they really were two different companies. In fact, in the late forties, All American publisher Max Gaines took his company out of the mix. DC ended up with the super heroes and the remaining books continued to be published as DC titles. Gaines took only his PICTURE STORIES FROM THE BIBLE and PICTURE STORIES FROM AMERICAN HISTORY and used them to spearhead the new direction for All-American which he now renamed Educational Comics or EC Comics. After his sudden death in an accident just a few years later, of course, the companywould fall to his son, Bill Gaines. Ditching the failing trend, Bill would rechristan EC as Entertaining Comics and, along with Al Feldstein and Harvey Kurtzman, go on to create not one but several legends, not the least of which was MAD. In the seventies, MAD would end up connected to DC through various corporate takeovers and by the new century this last remaining vestige of All American Comics was now finally officially being published by DC. If you're in Columbus, Ohio don't miss Mark Evanier interviewing EC's Al Feldstein this weekend at Mid-Ohio Con!
Posted by Booksteve at 9:32 AM