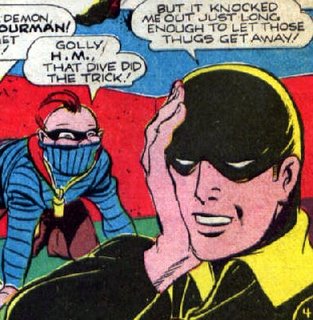 Well, turns out there was at least one that I STILL hadn't heard of so here he is. Tick-Tock Tyler, the Hourman briefly had a comic sidekick named Thorndyke. Short, fat, balding and wearing his turtleneck collar up over his mouth even when he's out of costume. (Note also the hero's little-seen mask as opposed to his more traditional hood). 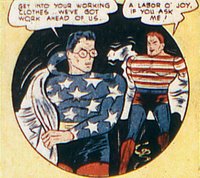 Here's a good shot of the Star Spangled kid's adult comic sidekick, Stripsey, also as well as Vigilante and

Stuff, the Chinatown Kid. Also, I mentioned before that the obscure Mister America (see THE GOLDEN AGE mini-series)had a sidekick, Fatman. Here he is in all his Forbush Man-like glory.

Check out the fact that his logo is nearly as big as that of the star of the feature! Finally, I was genuinely surprised to find that Wonder Woman's chubby l'l buddy, the inimitable Etta Candy,

actually headlined her OWN series, written and drawn by WW's creators.
Posted by Booksteve at 8:09 PM