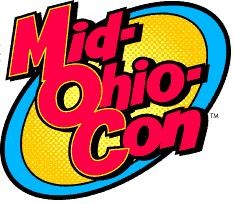 For many years I was unable to attend Mid-Ohio Con in spite of its relative proximity due to the fact that my retail management career dictated the necessity of working on the biggest shopping weekend of the year. This year, with that not being the situation, I asked for and was given next weekend off. Unfortunately, as we're still dealing with the financial effects of having been fired this past summer it turns out that it will not be possible again. Sigh. That said, I wanted to give it a plug as it looks like a great show! Gary Friedrich and Dick Ayers highlight the classic comic creator guests and, along with cancelled but now re-instated guest Herb Trimpe, they're to be interviewed on Saturday by fellow bloggers Mark Evanier and Tony Isabella. MAD's legendary second editor Al Feldstein will be there along with one of my all-time favorites, Louisville's own Don Rosa! Writer/Artist Bill Messner-Loebs is scheduled too! He's been through a hell of a lot in recent years but I always enjoyed his work (particulary JOURNEY) and recall him as a delightful convention guest back in the early eighties! Media guests include, among others, Richard Kline and Joyce DeWitt from THREE'S COMPANY, the great Marcia Wallace, Stan Lee's TV show winner Feedback and SEINFELD'S Soup Nazi, Larry Thomas. If you're reading this blog and you can get to Columbus, Ohio next weekend, I see no reason why you shouldn't go! Heck, if you wanted to write a review of the Con and send it to me, I might even run it here! If you see Mark, Tony or even Don, tell 'em Booksteve says "Hi" and "Maybe next year!" Mid-Ohio-Con Guests
Posted by Booksteve at 6:39 PM