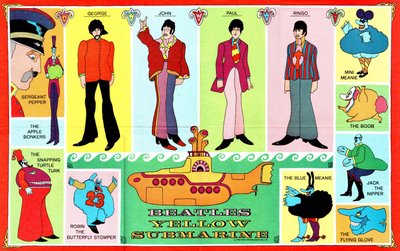 In the late sixties, Gold Key experimented with putting fold-out posters in some of its comics. As I recall they had them in DARK SHADOWS, CHITTY CHIITY BANG BANG and the adaptation of the Beatles film YELLOW SUBMARINE. This one was particularly cool because it gave nice views (and names!) to some of the monstrous Peter Max-style villains of the story, many of whom went unnamed (and under-utilized) in the film itself. YELLOW SUBMARINE was the very first film that I was allowed to go to see on my own (age 9) to the best of my recollection. The line for the Saturday afternoon matinee was stretched all the way to the Woolworth's down at the other end of the block. As previously stated, I was NOT really a Beatles fan until the LET IT BE era but, having discovered the comic at that selfsame Woolworths a week or two prior to the movie opening, I HAD to see it! I saw it twice that day and went to bed that night with Beatles songs echoing in my head for the very first time.
Posted by Booksteve at 8:30 PM