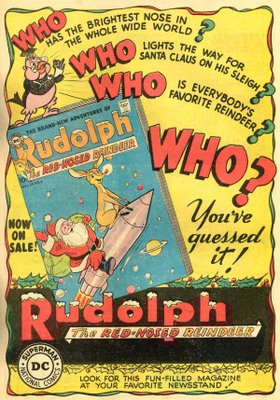 In the late fifties and early sixties (and then again in the seventies in the tabloid format) DC published annual issues of a comic based on the famed "ninth reindeer," Rudolph. Immortalized in cowboy music and TV puppets, Rudolph's four-color adventures were marvelous comic inventiveness. In fact, the seventies revival was from Sheldon Mayer, the unsung hero of DC/All American Comics. According to most sources, Mayer was instrumental in getting SUPERMAN published, he edited and shepherded most of the AA line that included the JSA members, he created Scribbly, the teenaged cartoonist as an alter-ego, the original Red Tornado and later and most legendarily, SUGAR AND SPIKE! If you look closely at some of Mayer's mid-sixties art, you could also make a good case for him being a possible influence on underground artists of the Gilbert Shelton school! Here's a late fifties RUDOLPH THE RED-NOSED REINDEER house ad to start off December right!
Posted by Booksteve at 7:14 PM