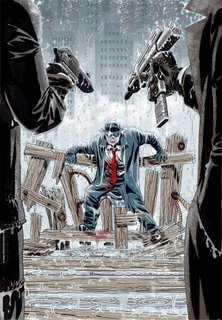 I'm on record as being a huge fan of Will Eisner's SPIRIT since age seven in 1966! Over the years, with rare exception, Eisner resisted the temptation to allow new creators to do new adventures of his classic character...until now. Supposedly approved by the Master prior to his passing last year, DC gave the project to Darwyn Cooke whose retro art style combines elements of classic comics art and current TV animation. He premiered his take on the "late" Denny Colt recently in a team-up with Batman that both surprised me and delighted me. Seems Commisoners Dolan and Gordon were old friends and an attempt by Batman's rogues gallery to eliminate Gordon leads to a team-up between Central City's masked vigilante and the Gotham hero he had thought just a myth. Now comes the first true issue. It's a slight piece in a way, reading at times more like an homage to Eisner than the first of a continuing series. Still, the familiar characters are well-delineated and the deceptively simplistic artwork masks a modern and fairly adult story. The new female reporter character is a joy. Obsessed with succeeding in her job (and the ratings) in spite of kidnap and rescue attempts, she broadcasts the whole thing via her cell phone. One of my favorite things about the new SPIRIT is Ebony! He's here and he works! Frank Miller! Take a look! Don't just write him out of the movie. At its peak and looking past the stereotype, Ebony was the humanizing heart of the seemingly indestructible Spirit. Looks like Cooke's planning on keeping it that way with a modern twist or two. Look's like THE SPIRIT is yet another modern comic book I'm liking here!
I'm betting Will would, too.
Posted by Booksteve at 6:07 PM