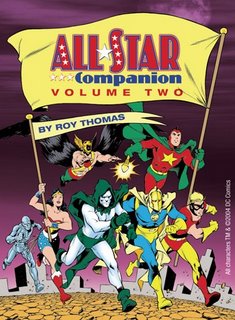 Yet another cool Christmas gift I received, this one from my lovely wife, was Rascally Roy Thomas's ALL STAR COMPANION 2, the new book from the always reliable Twomorrows. This is, as you might guess from the title, a follow-up (one of two expected!) to 2000's unnumbered ALL-STAR COMPANION. Roy, along with the late Jerry Bails, is on record as a huge fan of the 1940's DC heroes, particularly those of the Justice Society of America. Both of these lovely volumes cover the JSA's appearances in ALL-STAR and beyond in obsessively minute detail and depth, something we greatly appreciate around here. Hundreds of pieces of rare and sometimes previously unpublished artwork dot each volume as Roy and friends weave the tale of each individual canonical appearance of the JSA in the forties and, in Volume two, Roy's own WWII era ALL-STAR SQUADRON from the eighties. Irwin Hasen, Arthur Peddy, Harry Peter, Mart Nodell, Joe Kubert, Bob Oksner and Beranard Sachs are given their due along with a dozen more as writer Gardner 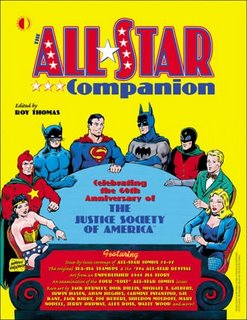 Fox is rightly lionized as one of the best comics writers of his day. Later, Jerry Ordway leads the way in coverage of the ret-conned Squadron series. Volume two even has a feature about the ads that appeared in ALL-STAR COMICS. You know, the same ads we've been running from time to time here at the Library! Captain Tootsie, Sam Spade and those guys! Hours and hours of great comics info and trivia in both of these fine volumes from one of my all-time favorite comics writers. Another great geek gift this holiday season!
Posted by Booksteve at 7:24 PM