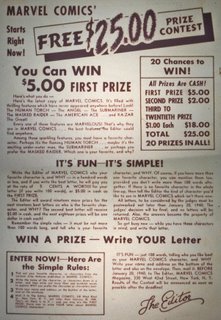 Here's a deal you don't see anymore! This is an inside cover ad from MARVEL MYSTERY COMICS # 4, soliciting mail for money! That's right! The editors would pay you good money (especially for 1940!) in exchange for letters detailing your favorite characters from MARVEL MYSTERY. SUB-MARINER, HUMAN TORCH, KA-ZAR, ANGEL or the AMERICAN ACE? Which one was it. Well, my money's on AMERICAN ACE for LEAST favorite as he's one of the very few Marvel/Timely characters whom I don't believe has EVER been revived. Incidentally, Stan Lee, although working as an "office boy" was NOT yet an Editor. Come to think of it, maybe that's the real reason he became an editor. Instead of giving out REAL cash, Stan came up with the ingenious concept of the "no-prize."
Posted by Booksteve at 10:25 PM