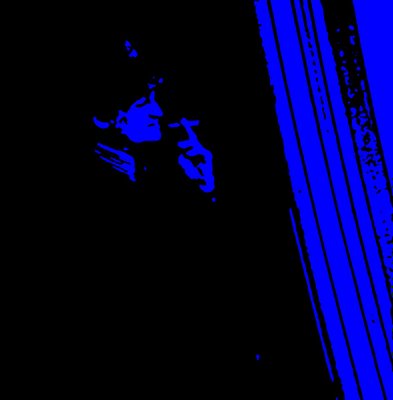 My father died in December. Oh my Gods and Goddesses, has it really been fifteen years ago?
My father, Frank, taught me a lot of my pop cultural background. He loved newspaper comic strips and from the earliest stages that I can recall would share the Sunday funnies with me. It’s sometimes hard to recall as an adult but that folded out Sunday comics page is huge and colorful and looks like a gameboard to a kid!
He bought me my first comic books, Harvey issues with CASPER and HOT STUFF picked up every single time he found himself in a drugstore that carried them. When I was old enough to go along, he let me pick my own and dutifully paid for them. By then, I chose BATMAN.
Frank himself loved comic books, too, especially SUPERMAN, SPIDER-MAN and his longtime favorite, DICK TRACY. He was in seventh heaven over the long series of sequential Blackthorne Tracy reprints started in the eighties.
His personal tastes in humor led to his teaching me to appreciate the comic subtleties of the Three Stooges, the Bowery Boys and Abbott and Costello. He also instilled in me an appreciation for silent comedians. His personal favorite, though, was always Red Skelton.
When it came to movies, he loved them, old and new. He introduced me to favor 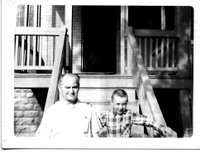 ite classics such as ANGELS WITH DIRTY FACES and DOUBLE INDEMNITY and, as I got older, to newer films he enjoyed such as DIRTY HARRY and DEATH WISH. His favorite actors were James Cagney, Edward G. Robinson and Spencer Tracy.
He grew up with B Westerns and whenever possible he shared that love with me also. In the seventies, a local TV station picked up a B Western package and the two of us sat down together weekly to watch Tim Holt, George O’Brien and every once and awhile Buck Jones ride the range.
Television became more and more of a favorite pastime as he grew older. He had always loved silly sitcoms such as THE ADDAMS FAMILY, MY MOTHER THE CAR and HOGAN’S HEROES. Westerns such as BONANZA and GUNSMOKE were weekly features at our house. He, along with my mother, also became a big fan of DARK SHADOWS. Frank retired in the late seventies after being hit by a car while crossing a street. After that, he became a big game show buff, delighting in CARD SHARKS and THE PRICE IS RIGHT. Survey people used to call and ask what his favorite shows were. 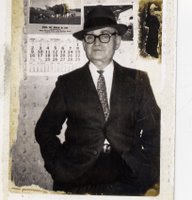 After awhile, he realized that every time he told them, those shows were cancelled soon after. At that point, he began lying to the surveyors saying that he watched shows that he actually hated.

AS far as music, I could never get him to appreciate the Beatles or even the Monkees but he did instill in me a lifelong appreciation of swing music and Bing Crosby, his all-time favorite singer. He had even gotten to see Crosby and Bob Hope together in England during World War II.
Most of all, the thing that he instilled in me most was a love and respect for reading. He read constantly-fiction, non-fiction, newspapers, the Bible, comic books, dirty magazines. What you read didn’t matter to him so much as that you DID read! 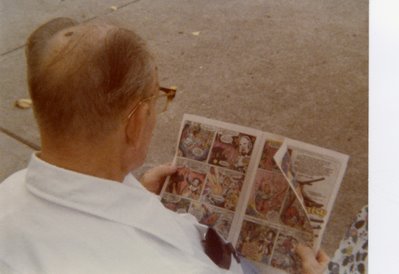 Frank lived to see me perform onstage when I was with the comedy troupes. He got to hear me on the radio with them, too. He was in the audience for one of my game show appearances and saw my first few pop culture magazine articles published. He wasn’t really the type to say it, preferring to come across as a kind of hard, conservative father but whether he said it or not I knew he was proud of me. I wouldn’t have the pop culture background I have without my dad. You wouldn’t be reading this blog without my dad.
Fifteen years. In a way it seems forever. In a way, he’s never left. I hope I do HALF as well by my son.
Posted by Booksteve at 6:39 PM