A New Kind of Family 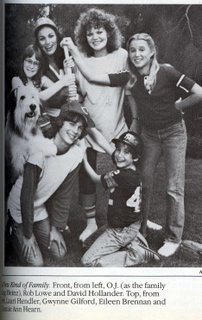 At long last, here’s another forgotten TV show from the seventies. A NEW KIND OF FAMILY was one of far too many "relevant" series, most of which were thoroughly irrelevant in the end. This particular one from 1979, however, is notable for several reasons.
Essentially a vehicle for actress Eileen Brennan whose career was on the rise after appearances in several hit films including MURDER BY DEATH and THE CHEAP DETECTIVE, A NEW KIND OF FAMILY told the story of a two women who move in together (platonically. This WAS the seventies) and combine their families. One of the kids was Rob Lowe who would err…pioneer the accidental sex tape release less than ten years later. This was his first actual credit, believe it or not. The younger boy was played by David Hollander who was instantly recognizable as a TV kid in the Disco decade. He has since turned his attentions to scoring programs, perhaps most notably the recent animated series MY GYM PARTNER IS A MONKEY!
Near the end of the series brief run, the color of the roommate family was mysteriously changed with Telma (TONY ORLANDO AND DAWN) Hopkins and future wardrobe malfunction queen Janet Jackson taking over the mother/daughter roles, adding yet another trivial reason to remember this also-ran series. When it ended, Eileen Brennan went straight into what will probably be remembered as her signature role, that of the tough Captain in Goldie Hawn’s PRIVATE BENJAMIN. In spite of longtime health issues, she keeps building up credits even today when nobody remembers A NEW KIND OF FAMILY at all.
Posted by Booksteve at 8:08 PM