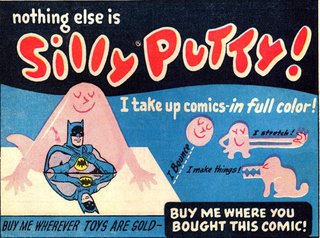 Okay, so erector sets were a tad before my time on the Baby Boom scale. Silly Putty, on the other hand, was the "IN" thing during my youth! I recall seeing the ads (like this one from a 1966 comic) and buying it at Woolworths. In fact, I recall buying it a number of times over the years, usually in its traditional plastic egg container. Once, though, I found and bought Silly Putty (or possibly a knock-off) in a cool plastic skull container. Being the CAPTAIN AMERICA fan that I am, I naturally painted the white skull container red. I still have it! I'm sure you all know that Silly Putty was invented by accident when trying to discover a rubber substitute for use in World War II. If not, here's a link that will tell you all about that:Silly Putty - Wikipedia, the free encyclopedia. As a kid, the important thing was that it could pick up comics images from the cheap pulp paper and stretch them!! Ahhahahahaha! What fun!! It didn't taste that bad as I recall either!
Posted by Booksteve at 6:28 AM