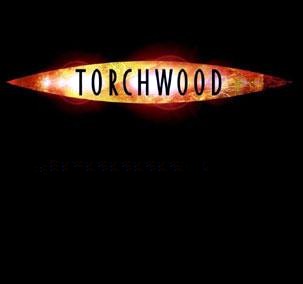 One of my favorite shows this season (passed on to me by folks in the UK) has been the BBC’s DR WHO spin-off TORCHWOOD. Essentially designed as a vehicle for the popular Eccleston series companion Captain Jack Harkness (played by John Barrowman), the series surprised me greatly by being an adult (at times VERY adult!) sci-fi/horror show along the lines of X-FILES. Rather than base the series around the notably bisexual time-travelling Jack, we enter TORCHWOOD through the eyes of Gwen Cooper (Eve Myles). She’s a young Welsh police officer (who may or may not end up related to the character of Gwyneth she played in a DR WHO episode!) who encounters the local branch of the secret nationwide organization devoted to researching and cataloging alien artifacts and technology and is drafted into the group by necessity. Jack himself is played as an enigmatic, moody (and that includes frequent light-hearted moods, too!) man with a most unusual past…and future. We’re never explained Jack in toto and, in fact, we’re led to believe that Jack himself may not understand exactly who he is. That’s part of the joy of the character. Still, Gwen is the POV star and her gap-toothed charm infuses every episode as her character develops in both good and not necessarily good ways throughout the season. Although not actually serialized, you kind of do have to watch the series in order as she and all of the other characters undergo a lot of changes. Each of the other regulars gets a star turn and each brings a deeper humanity to their roles than this type of series really requires. The overall effect keeps you off guard. There are lots of truly unexpected twists and turns, sharp dialogue, a great sense of classic British wit and lovely Welsh scenery (seen with wonderful camerawork and a lot of overhead shots). There’s also a considerable amount of blood, truly disturbing imagery, some fairly explicit sex scenes and the kind of devotion to detail that you really just don’t see on American TV these days. Producer/creator Russell T. Davies wins again! As Captain Jack says in the intro to every episode, "The 21st Century is when everything changes." If this series is any indication, it’s a change for the better! Don’t know how this one will survive on American TV but undoubtedly it will eventually cross the Atlantic. After all, Captain Jack IS an American…or is he?
Posted by Booksteve at 7:38 AM