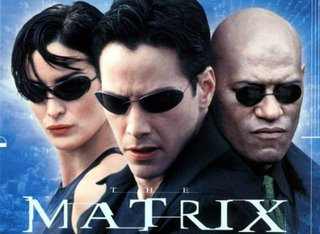 Not a big Keanu Reaves fan so I didn’t rush out to see THE MATRIX back in 1999…or since. It looked pretty good mind you. Just never a priority. I mean I do enjoy Larry Fishburne (Pee-Wee’s "Cowboy Curtis!") and the words "comic book-like" were bandied about quite a bit in connection with it but then that’s not always a good thing, y’know.
Then came Kim. Longtime readers know that my young friend Kim has eclectic tastes in…well, everything…and has a bizarre knack for finding films that I would greatly enjoy if I would just watch them. She insisted that it was time I watch THE MATRIX. I loved it!
Looking past the highly touted coolness factor and the nifty special effects, it really does offer an intelligent storyline in which reality itself is questioned on multiple levels. Nothing is what it seems. No one is as expected. There’s a lot of pop philosophy espoused throughout (so much so that a MATRIX philosophy book was later published) but in the end it’s the characters’ humanity that succeeds in shining through.
The fight scenes are choreographed in the style of Chinese martial arts films (ironically aided and abetted by computer) and the action sequences match any 007 film there ever was. The performances are good with Keanu being suitably cold for most of it and Carrie-Anne Moss (who according to IMDB once appeared in a TV series entitled MATRIX) owning her "kick-ass"(Kim’s words) role out of the gate. Fishburne is the heart of it all, though as Morpheus, the mentoring leader of the rag-tag group trying to reveal reality to the masses.
Why am I telling all of you this, though? Apparently I was the last comic book geek to see THE MATRIX. You guys have already seen it. We started the second one tonight but didn’t have time to finish it. I’m looking forward to it, though…thanks once again to Kim.
Posted by Booksteve at 11:09 PM